Continuing with my project update.  This is over several months of work beginning in the summer of 2016, and concluding at the present.

For a while, I ran the machine with a glycol freezing evaporator and the copper static condenser.  Operation was improving everyday as I learned the characteristics of the system and how to adjust the system charge, as well as the thermostat set points.  The condenser had obvious drawbacks with its poor subcooling, and I knew I would eventually be replacing it with something else.  Storing cooling capacity in the glycol mixture (a non-eutectic solution) has the advantage of long run times with longer off times.  This is especially useful in a capillary tube system which can take a little while to come to proper run characteristics, such as dense suction vapor and good mass flow through the compressor.  So several short cycles aren’t normally gong to be efficient as few longer cycles.  There is also great interest in making the system DC powered for a battery off-grid setup.  Longer holdover times could be useful when energy isn’t available.  The disadvantage to a system like this is that during the run cycle it must discharge all of the ehat absorbed by the glycol during the run and off cycles; several hours of heat in a fraction of time it took to collect.  I have long sought to build a phase change material based condenser. 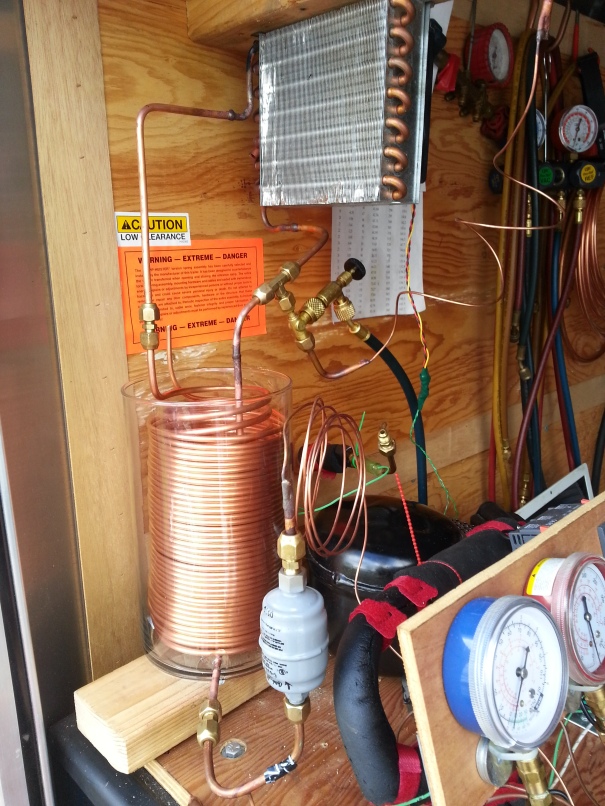 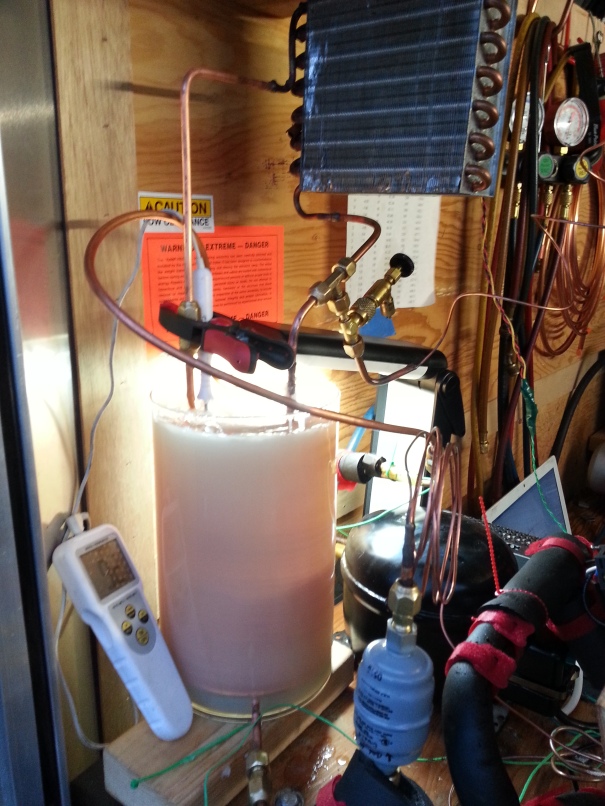 The cheapest PCM for the temperatures involved was white paraffin.  Pure samples could be used which have a majority hydrocarbon lengths (and melting temperatures) of a specific point, however these are rather expensive.  The next best thing was petroleum jelly.  It does not have a specific melting point, more like a range, which seems to start around 90F and go to about 115F.  If I could discharge all of the heat pumped from the glycol freeze tank into a mass of paraffin, then I thought the melted wax could then be cooled over the few hours to the next run cycle.  In order to do this, I rigged up a two phase thermosiphon to an fan cooled condenser coil.  The working fluid was of course propane.  Two coils were submerged in the wax tank, the condenser to melt the wax, and the thermosiphon evaporator to re-solidify it.

Results with the setup were rather poor.  The greatest limitation to a wax PCM in this arrangement seems to be the dismal thermal conductivity of paraffin, even in liquid form.  Once the wax began to melt and heat up, it didn’t seem to transfer the heat to the thermosiphon evaporator very well, about 1/2″ away.  I am pleased with how the two phase thermposiphon appeared to work on its own though.  For having just thrown it together and charging liquid until heat began climbing from the wax tank, the condenser / fan blew warm air very well, although perhaps not at a rate necessary for rapid re-solidifying of the wax.  It would continue to dissipate heat for a few hours after a cycle began.

Head pressures and VC condenser temperatures remained high throughout the run cycles.  Subcooling was extremely poor.  Flash gas in the evaporator was no doubt very high, and overall performance was lacking.  It was a good attempt, and I know where I could have improved it, but in thinking of the ultimate layout and operation of the machine I want to build, I felt it was an unnecessary complication and its application would make servicing the unit difficult- when a over arching goal is to make it robust and easily repaired. 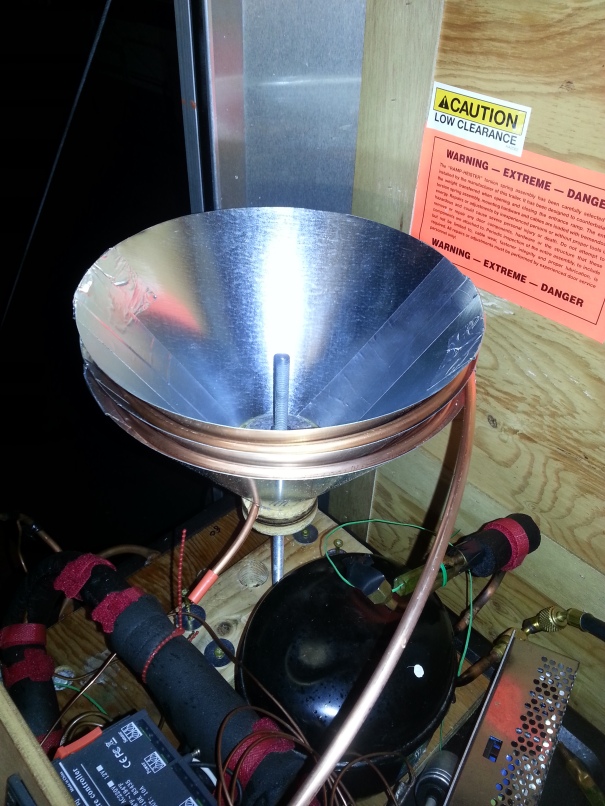 I had so much fun with the first thermosiphon that I wanted to give it another go.  This one lacks any wax, although I was considering PCM if things worked out.  This experiment centered around the idea of bringing the VC condenser coil and the thermosiphon evaporator coil in close thermal contact.  I wanted to see if I could make a removable condenser coil such that the VC condenser itself just formed half of a gas to liquid heat exchanger, and the actual heat dissipating surface would be the condenser of the thermosiphon.  In this way I could make the hyperboloid condenser like a hat on top of the system, which was removable.  I even had plans to incorporate the HX into the construction of the hyperboloid structure, and possibly integrate PCM into it as well.

The construction is of two 1/4″ tubing coils made into a cone shape and sandwiched between three sheet metal cones.  Bonding is only mechanical.

This experiment shared a lot of similarities to the wax experiment.  Again, head pressures were high and subcooling poor.  I was able to adjust some things to get the machine working, but the HX was a detriment to performance.  It seems that the VC condenser temperatures had to maintained excessively high in order to get much heat flow through the thermosiphon.

Again, there were a number of things I could have done to improve the performance, like a thermosiphon which required a smaller deltaT, or a better HX to increase thermal transfer to the evaporator coil of the loop.  It was an interesting project, but I felt pursuing it much further would take away from the desire for relative simplicity. 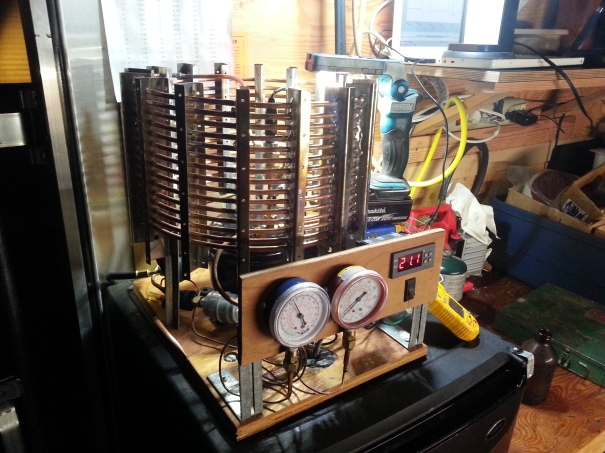 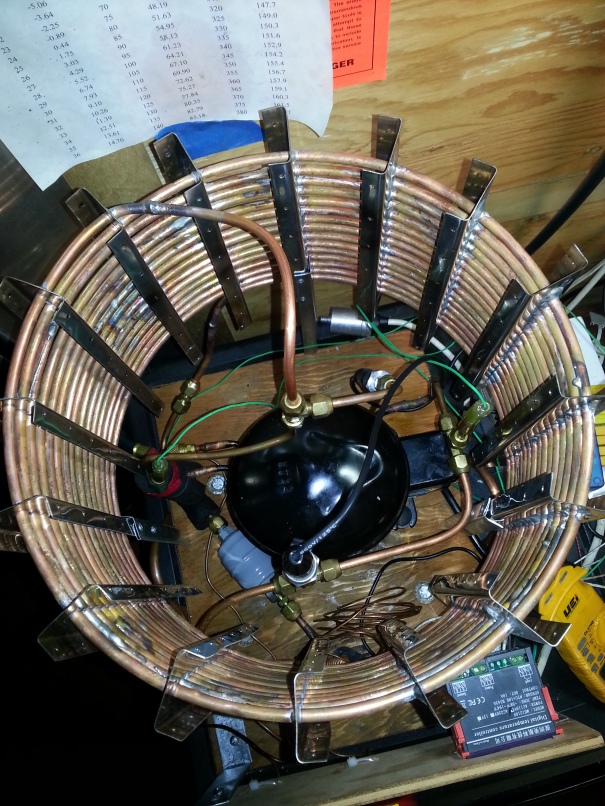 Trying to reduce head pressures and increase subcooling over the hyperboloid condenser, I decide to construct a large HX comprised of many stainless steel posts, cut by hand, drilled on a drill press, bent on my cheap brake, and then laced onto a 50′ coil of 1/4″ copper tubing.  This was an incredible amount of work, and the process of running the copper though all those holes was very distressing.  Think of put more than one key on a key ring at a time, but then do sixteen keys and spin them around through fifteen holes that aren’t much larger than the ring.  It was hard, and it was supposed to come out like a cylinder, but instead it had a slight taper.  I didn’t care at this point, and I then silver soldered the copper to the posts.  The intention was to then form sheet metal cylinders for the inside and out which would form an annular space to act like a chimney stack and increase airflow past the coils to further dissipate heat.  With the taper, attaching a skin would be complicated, so I made up crude skins and fitted them with tape.

In operation, the skin did produce a draft which would pull a flame, but the head pressures were higher than without the skin at all.  So this is the condenser I’m using today.  It does what I intended to do, with lower head pressures and better subcooling.

The next condenser will have a more dynamic look, with a return to the hyperboloid shape, and hopefully better thermal characteristics.  I’m adding a few tools to my arsenal to assist me in this endeavor including a TIG welder, metal hole punch, and a throatless shear. 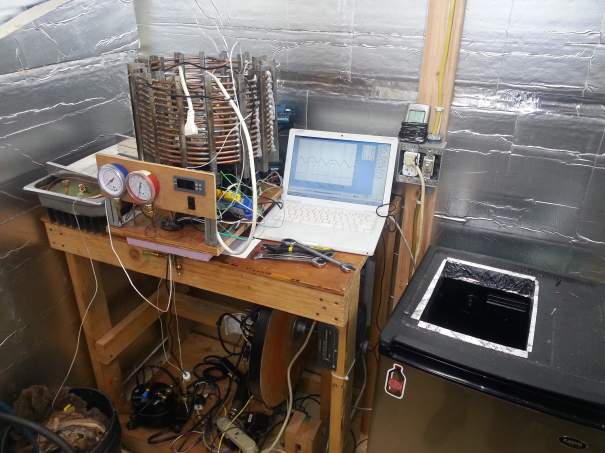 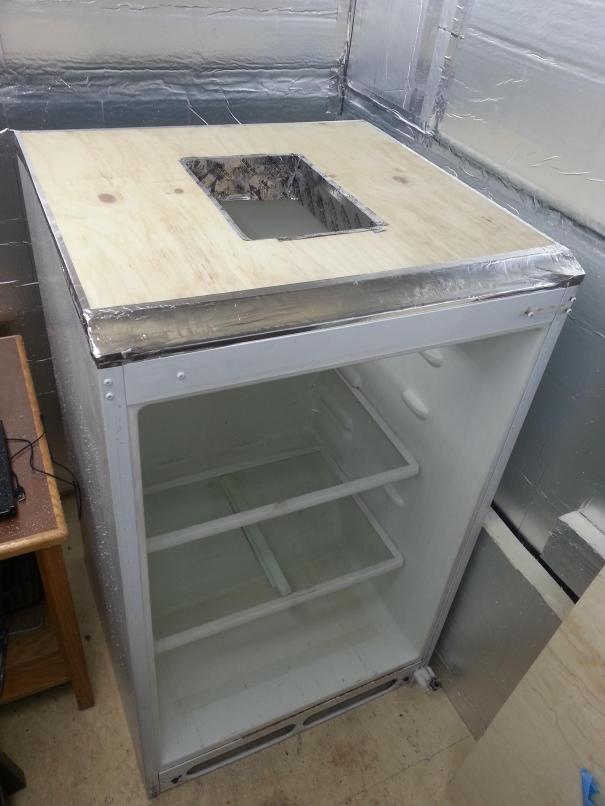 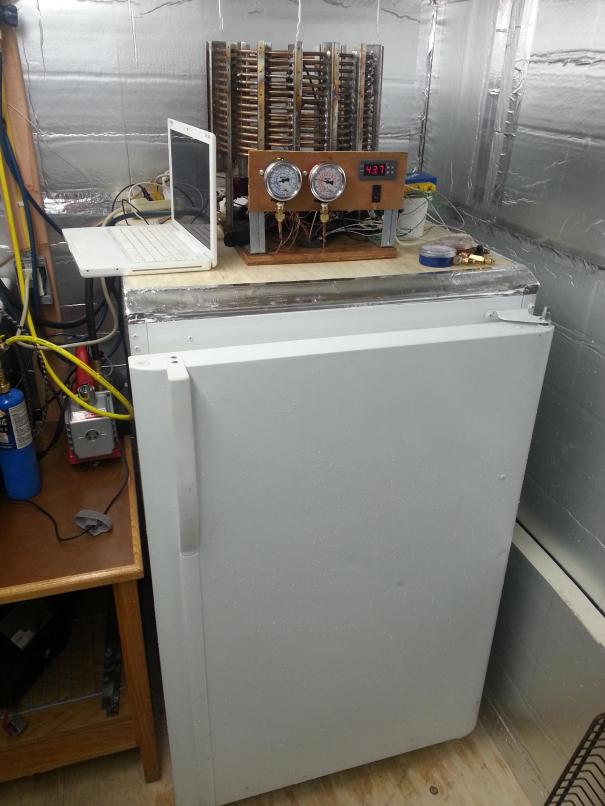 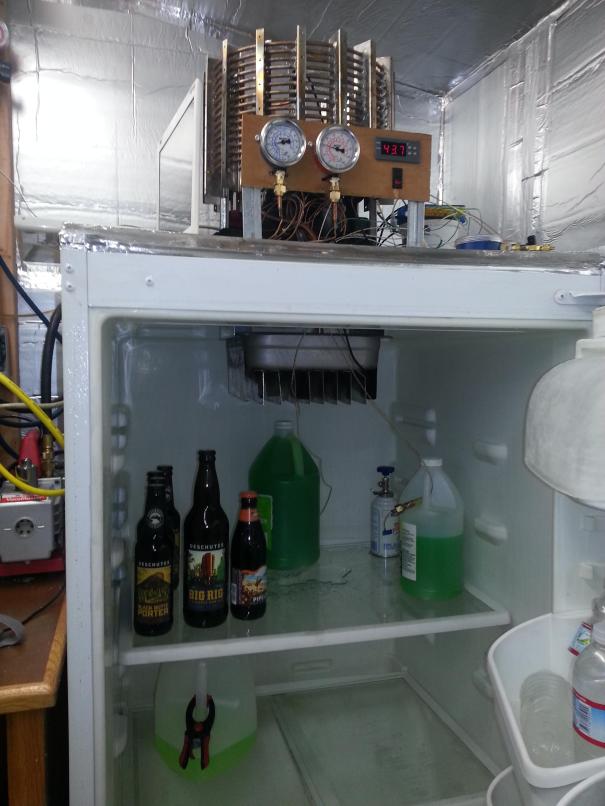 When I moved into the new lab, I set out to upgrade my cabinet to something a bit larger.  An old shop fridge was acquired from my work place.  Cutting off the freezer section, I capped the ugly exposed insulation with plywood and cut a hole for the chilling module.  No changes were made to the module itself.  The entire operation took about an hour, much less if the glycol pan wasn’t larger than the insulation that forms the seal in the cabinet, and dictates the hole size.  The next module will not have this limitation, and transfer will be much easier.

The above photo was taken a few weeks ago.  I have a small electric space heater on a thermostat which maintains the temperature in here at around 70F.  Module operation is smooth and consistent, so comparing performance of the module after modifications is much easier.

Two nights ago, I hung a small DC circulating fan to blow on the glycol pan in the hope that it will lengthen off cycles by utilizing the cooling capacity of the glycol more effectively.  It seems to have done just that, with very consistent run times of 2 hours and off times of 4 hours, almost like clockwork.  I will be exploring different thermostat settings for the tank, and thermostat settings on the circulating fan.  At present time, I intend to implement a system like this in the next module, although the appearance and organization will be very different.