I’ve been collecting antique refrigeration books for a little while now and so far, my favorites have been two editions of ‘Household Refrigeration’ by H.B. Hull.  It is a beautifully laid out book covering both thermodynamic engineering principles relating to vapor compression design as well as providing a diverse assortment of the refrigeration technology and the craftsmanship available at that time, the late 1920s.

It was a period of time where American companies both designed and manufactured high technological goods for the domestic market and the world.  Refrigerator companies were diverse and popped up from seemingly nowhere like automobile manufacturers in the late 19th century.  Sure some had been gobbled up by giants, but there was much more variation before the economic depression of the 1930s when I’m sure many of these companies went under or were rolled into monsters like General Electric, as often happens in capitalism’s inevitable downturns and consolidations.  Some of these names are still recognizable: Electrolux, Sunbeam and North Star.  Many of these manufactures in the book are based in New York, New Jersey, Ohio, Indiana, Pennsylvania, Michigan and Washington State.  Some of these manufactures, like the Jewett Refrigerator of Buffalo, NY had been in operation since the mid 19th century.

As you can see, they used that time to master their craft.  This unit here has a liner of porcelain 1.25 inches thick!  Not only does this make for a beautiful interior that is bright and easy to clean, it also adds a bit of thermal mass to the unit and more favorable cooling characteristics.  A liner like this was as much an art as a science to manufacture and was incredibly expensive.  The insulation and cabinet had to built around the porcelain shell.  Later developments used porcelain sheets held in by metal strips making manufacturing easier and cheaper.  The ice basket is obvious in the top left compartment.  It hangs from the roof of the cabinet and can be removed and be replaced by a mechanical evaporator unit.  The cabinet also has holes built in for the associated tubing as well.  Such was  a common practice at the time.  I noticed between the 1926 edition of the book and the 1933 edition, that many refrigerating units in the mid 20s were built for the purpose of retrofitting existing refrigerator cabinets once cooled my ice, while the updated book detailed many more ready equipped refrigerating system / cabinet combos as we know them today.  And so the ice chest refrigerator faded away, but in their day they were beautifully crafted with the materials known at the time.

Take special note of the  two large holes in the center section of each of the two refrigerators above.  These were of course to allow for warm air in the top of the right cabinet to enter the ice cabinet, be cooled and de-oderized, and then fall to the floor to pass through the bottom hole to again remove more heat from perishables.  These ice chest refrigerators had surprisingly strong air currents in them with good insulation (or the best available at the time), to support that.

There were a number of insulating materials known at the time, but by far the most common was cork, wood, mineral wool with layers of asphalted felt paper for a sort of vapor barrier.  The white portion above is of course the thick solid porcelain lining.

Sometimes dead air spaces would be made use of to add to the insulation barrier which I’m sure could be effective.  An air space (a dry one), forces heat from the outside to radiate from one surface to the next rather than direct conduction.  The problems arise when the air space is not sufficiently dry and condensation forms.  If the wood, cork and other materials are not well protected, they may become saturated with water there by losing insulating value and potentially becoming odiferous.  The bottom right of the above diagram also shows the door mating surface to the cabinet.  An all wood construction led to a great deal of heat conduction and condensation issues. 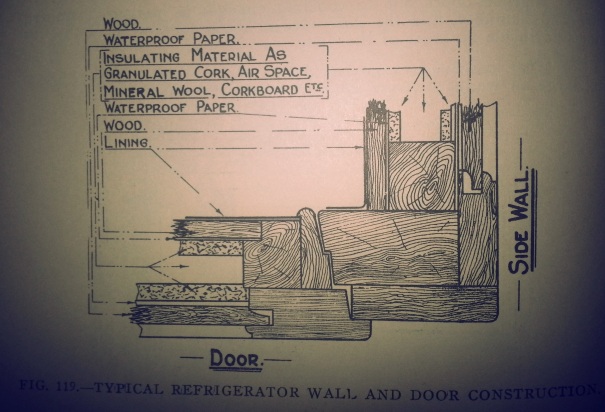 Another corner diagram, this time with the door.  Almost every refrigerator described in the early books had a wood on wood door construction.  This led to conduction problems, drafts, condensation and warping.  Some had metal surfaces which probably mated better, but would only aggravate condensation issues.  I was surprised that natural rubbers were not used to make better door seals.

Another pretty piece from the period.  Notice the specific placement of foodstuffs.  The dairy below the ice block where it is coolest to the vegetables placed on the top shelf where there is the greatest moisture. 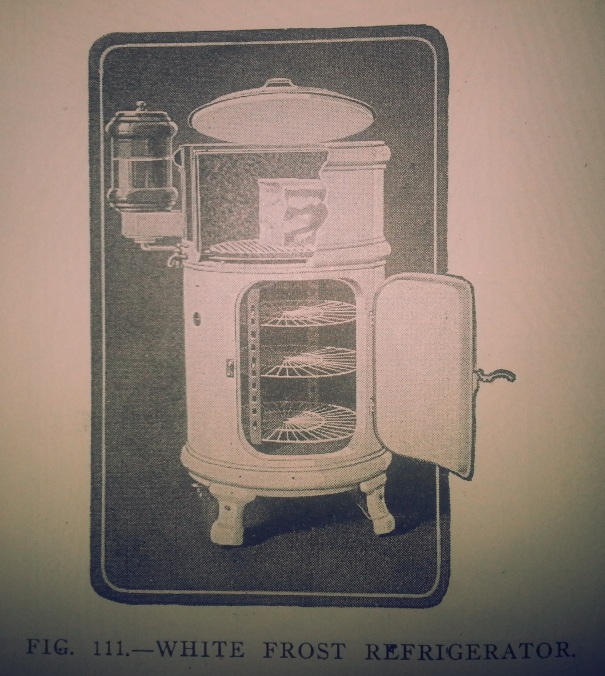 The White Frost Refrigerator by Home Products Corporation, Jackson, Michigan.  I threw this in here just because it’s an oddity.  Any gains in convenience brought on by the ‘Lazy Susan’ style construction were probably lost in floor space.  Notice the water cooler on the top left.

This wasn’t a particularly well constructed box.  The small amount of insulation would have caused rampant condensation in the air spaces of the wall.  I like this diagram because of the mention a ‘Composition Lining’.  I did not know what that was and there was no description.  My first thought was a troweled on cement, stone or tile.  Later I found out these were materials sometimes used.

A much better insulated wall.

A reminder that these gorgeous appliances were hand built like any other furniture of the time.  These were made to last a lifetime and that brings me to my interest in refrigerator cabinet construction.  I want to build a better refrigerator; one that not only consumes less power and is more convenient to use, but also is made of sustainable materials.  Modifying an existing refrigerator cabinet was considered for a while, but seeing these beautiful examples of period craftsmanship makes me realize that starting from a clean slate is much more fun and leaves open the possibility to build anything I can imagine.

Wood is an obvious choice for frame.  Dimensional grade pine lumber is cheap, easy to work with and currently plentiful.  Oak would be a better choice for a production line product, not for testing.  Conventional compartment design of modern day refrigerators is not a rule in refrigerator design, it’s a bad habit.  We can do better.

There are many more insulations available today than in 1926; unfortunately, the majority are nasty petrochemical based polystyrene, urethane, polyisocyanurate and of course the expanding foam with the skull and cross bones on the can.  One can’t argue with the effectiveness of these insulations, but the health hazards due from the manufacture and off gassing after installation make them unsuitable for food storage purposes.  The natural alternative ‘eco friendly’ alternatives offer R-Values somewhere around half of their cancer causing cousins, so a bit of creativity and layering become important.  Some materials like straw bale and blow in cellulose are very low cost, but are required to be very thick and so only suitable for home construction.  Cork was a good insulation before cheap synthetics came about and certainly deserves consideration.  It can be acquired in fixed dimensions however, the cost may be prohibitive.  I haven’t researched it fully.  Loose fill perlite has a reasonable insulation value and could be used similar to expanding foam.  Dead air spaces (humidity controlled of course) could layer foil backed mineral wool insulation.  Corrugated cardboard, if kept dry, has a surprisingly high R-Value.

A porcelain cabinet lining is not practical for a home built refrigerator.  Stainless steel would be easy to clean and lasts forever, but it’s expensive and requires specialized equipment and skills to work with.  I personally favor ceramic tile laid over plywood.  Think of it; it’s common, relatively cheap, easily customizable, an accessible skill to most, pretty easy to clean, adds thermal mass to the interior and allows anyone to make a highly personalized refrigerator they can cherish for years.  Remodel like you would a bathroom.

The most obvious choice for the exterior of the custom refrigerator is plywood, but it doesn’t have to be that bland.  As much creativity can be applied to the exterior as interior.  Paint, murals, corner trim, lap boards, sheet metal, (tile may not be a good choice for durability in case you want to move it someday), veneer, old license plates, chalk board paint.  The sky is the limit.

I would throw the hinged door out right away in favor of a sliding door.  It goes like this:  Heat rises and cold air sinks, so when a refrigerator door is opened the cold air inside tends to sink to the kitchen floor while warm air from the kitchen rolls into the top of the cabinet.  This puts a tremendous load on the machine and is something of an unavoidable fact of having a refrigerator so DON’T LEAVE THE DOOR OPEN LONGER THAN YOU MUST!  But wait, if you go tearing the door open, grab what you want quick and slam it shut, you probably just filled the space full of warm air because of all the turbulence caused by the ‘suction’ of the door and necessary pressure equalization.  With a sliding door, the air volume does not change and there is little turbulence to ‘mix the air up’.  I think a well insulated house window would be appropriate for a number of reasons.  The insulation is great, they’re air tight, come in a variety of sizes and obviously they’re transparent.  You can figure out what you want BEFORE you open the door.  Just like the supermarket.  A normal double hung window could be slid up or down to retrieve what you want depending on what shelf it is on there by limiting air exchange.  The same idea applies to a horizontal sliding window.  Of course, with the swing door goes the storage space on the door, but a little creative design might replace the convenience of the door space such as a wire rack that slides out holding condiments and such.

Well, that is enough blabbering on about cabinet design.  If you read all that drivel, you might be as captivated as I about the common domestic refrigerator.  That or you are REALLY bored.