Homesteading Refrigerator to Die With –Part 2– Insulating to Decrease Load

In an effort to reduce the power consumption of a stand-alone domestic refrigerator an upright freezer, I will be adding additional insulation to standard units.  A large amount of the heat gain (and thus heat to be pumped out), leaks through the walls of the cabinet.  Another great source of heat load is air leakage around the doors, so quality seals are a must.

Insulation types have changed greatly over the years, from horse hair, charcoal, cardboard, rockwool, cork, fiberglass, to to the standard today:  urethane blown foam.  Although it could be fun and beautiful to build a cabinet from scratch, this is a project for another time.  Manufactured cabinets are so incredibly common, people pay to get rid of them, so I might as well use this as a good sealing core to my fridge and freezer, and insulate around that.  I could build a large wooden box, finish the outside with tongue and groove with trim, support the core cabinet in the center of the box, and blow in an expanding foam around it, but I’d prefer to avoid nasty (and messy!) substances like these.  Instead, mineral wool bats or thick sheets will be strategically placed over the top, bottom, back and sides.  The sides, top and bottom should extend out a few centimeters to account for the recess of the door. 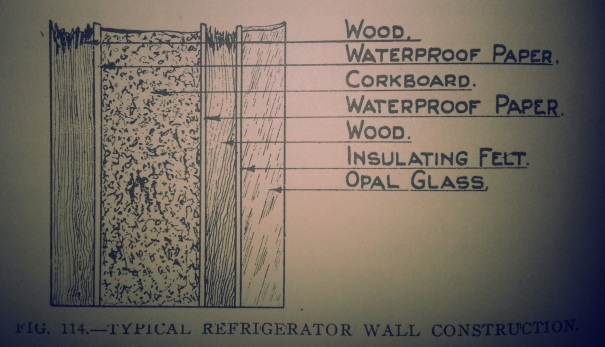 Likely an ice refrigerator from the early 20th century

The door itself will be insulated similarly to the cabinet, fully enclosing it with mineral wool, or perhaps a foam board.  The face of the door is finished with wood in the same style as the cabinet.  The nature of the recessed door won’t allow for the original cabinet hinges to be used, since it will swing into the extended wooden cabinet recess.  The metal cabinet hinges are removed, and the now enlarged door is hinged to the enlarged wooden cabinet with heavy bar cooler hinges.  Proper alignment here will be very important to ensure proper sealing.  A second layer of gasket material may be a good idea to reduce the temperature difference across each one, and to have a layer of “dead air” between the two.

Along with heavy hinges, a latching cooler handle keeps the door shut and tight.

Lay anything with insulative properties on the lid of a running chest freezer, and in time you will find the metal surface underneath will be cool to the touch, and may very well condense moisture from the air.  Condensation can occur withing the cabinet walls of a refrigerator/freezer, which was not uncommon with early models, but has largely been eliminated with blown-in urethane insulation, as it effectively displaces ambient air from coming in contact with the cool cabinet liner.  A standard refrigerator/freezer has a temperature difference across the the thickness of the walls from slightly above cabinet temperature on the inner wall, to slightly below ambient temperature at the outer wall.  By adding additional insulation, the outer wall of the core cabinet could remain below the dew point of the ambient air, and produce condensation against the mineral wool insulation, making it damp and reducing its r-value.  Also, this could be a breeding ground for mold and mildew, or rot the wood of the outer construction and rust the metal skin on the cabinet.  An insulation which is mildew resistant, like many commercially available options is preferred, but perhaps other efforts can be made.

Effectively sealing the outer cabinet to the inner core would be a good idea.  Perhaps a good polethylene type material would form a good vapor barrier.  I’ve also considered utilizing a desiccant like silica gel beads or Damp Rid to keep the cabinet liner dry.  Since the insulation is intended to be fairly thick (5cm+), I feel that I could install a few perforated plastic pipes that run parallel to the inner core wall and the outer cabinet wall, and put the desiccant in there.  These pipes would help keep the interior volume dry, and since many desiccants can be re-charged by exposing them to heat, an annual change-out of it might be a regular maintenance routine.  Then again, I could be worried about nothing.

Other physical details are easy enough to figure out, such as leveling feet, and whether or not it will fit through a standard door, but the refrigeration system itself will taking some planning.  With the exception of some commercial units where the compressor is on top, most will have a compressor under the main cabinet, tucked away in the back.  Although an insulation scheme could be worked around this, I for one will be re-locating it outside, and away from the bottom of the cabinet, where it bathes the refrigerator/freezer in discharged heat.  Moving it to the top of the cabinet is a sensible option, although ambient temperatures tend to be slightly higher, close to the ceiling, and the design has to ensure proper oil return to the compressor.

Due to later modifications, my compressor may be located to the side and near the bottom, with an air channel constructed along the side to direct air across a static condenser.  On the other hand, because the recess already exists in the bottom/back, this area could be further insulated and the compressor just moved outward a little bit.  Whether the fridge/freezer original had a static condenser, one could be installed on the back with stand-offs to ensure it isn’t slammed up against the wall.

Beyond these considerations, this would be a pretty standard vapor compression refrigeration system with capillary tubing, a mechanical (maybe digital with some control) thermostat, and likely propane refrigerant.

I have no doubt the added insulation will drastically cut the energy demands of both the refrigerator and freezer.  In fact, I’m surprised more people don’t try it, although few are worried about the couple of bucks a month they take to run.  Now in an off-grid situation, the concerns are quite different, and the power savings are realized in a smaller solar/wind installation, fewer batteries, and so on.  At the very least, I’ll have two reliable units, that use less energy to run, and are customized so as to be aesthetically pleasing.

Next, I’ll explore the advantages to living in a cold temperate climate, where I can make ice in the winter, and further reduce the energy needed for domestic refrigeration.