This is a three part series on refrigeration ejectors.  Part I on theory, is Ejectors in Refrigeration – an Expressor, and Part II on manufacturing techniques, Handmade Copper Ejector.

There is a lot of video media, so I will jump right in.  I ramble a lot. 😉 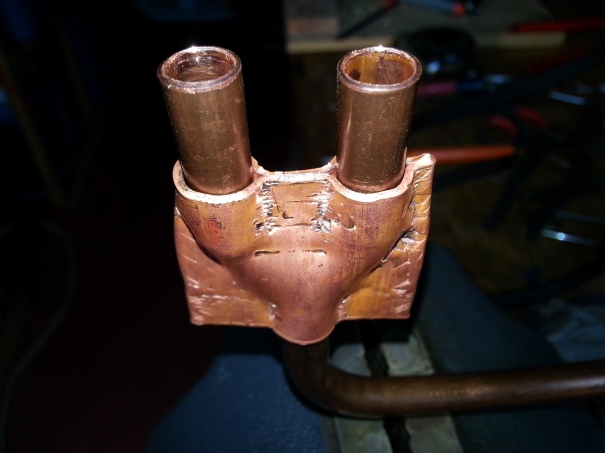 First, I thought I would share these weird things.  I call them “Ravioli fittings”.  As will become apparent shortly, I have an evaporator coil I harvested from an air conditioner, and the way it was plumbed wasn’t exactly what I had in mind.  I desired to feed liquid refrigerant to the bottom, and have it exit from the top, rather than go up the front set of coils and down the back (it’s a two layer heat exchanger).  So this is how I made a Y fitting.  I cut a short length of 1″ copper pipe, anneal it, and squeeze it into an oval shape.  Then by inserting 3/8″ hard steel punches as forms, I smash and squeeze the copper flat with pliers, the vise, and some hammering.  What I am looking for is a fine seem that I can easily braze.  This one above was a little trickier since the two lines on the top needed be a bit closer together, in order to match the evaporator coil.

Working with copper like this a a lot of fun, and a great learning experience.  I do not produce the fine finish work more talented copper smiths produce, but many times these things I’m constructing are experimental.  Not knowing whether they will even work, I focus more testing and multiple versions, than detail. 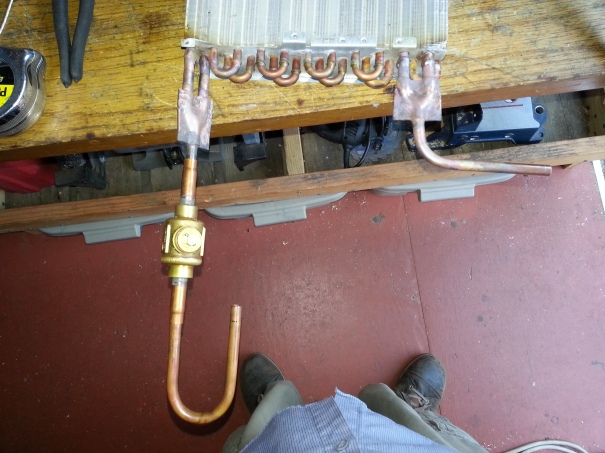 Brazing the tees to the evaporator coil was tricky business.  Two of the copper tubes split or deformed when I was disassembling the air conditioner.  I had to carefully match the Y fitting spacings, and the swage diameters to make brazing easier.  The brass gate valve pictured, is the refrigerant control, and will feed liquid from the medium pressure separator, to the bottom coils of the heat exchanger.  I will find out later that the gate valve is unnecessarily large for the application.

Above, you can see the main ejector assembly, and the separator column.  Starting from the top, a 1/4″ needle valve, regulating refrigerant flow to the primary motive nozzle sealed to the 1/2″ ejector housing with a compression fitting.  The 3/8″, 270 degree loop is the evaporator return line, which is connected to the annulus of the ejector at the 1/2″ pipe.  Coming down, we have the convergent nozzle, 1/4″ throat, the divergent nozzle, and the 1/2″ pipe brazed into the top of the separator column.  The liquid level in the column is intended to be maintained at about %50, as seen through the nylon tube sight glass.  A 3/8″ suction line to the compressor comes out near the top (above the liquid line).  A 3/8″ line feeds the evaporator metering valve on the bottom (below the liquid line).  Finally, there is a small 1/4″ copper stub protruding from the column, below the liquid line; this is for a thermocouples sensor.

I chose to return to the original water cooled condenser.  Once I can stabilize system temperatures, I plan on studying the enthalpy change of water being pumped through the condenser heat exchanger.  With this information, as well as the power draw of the system, I hope to make an early crude calculation of the COP.

A little bit about the system:  I’m running a 1/3 HP rotary compressor (hermetic), the water cooled condenser, the ejector system previously described, and picking up heat with the evaporator and fan unit from a 8000 BTU/hr window air conditioner.  The refrigerant is propane, charged as a liquid from a 20 lb. cylinder, with no in-line filter.  The vapor compression system itself has a filter / moisture remover (that is nearing its useful end).

Charging is done, neither by superheat, nor subcooling, but by observing liquid level in the nylon sight glass in the separator column, as well as the sight glass on the evaporator return line.

Now a flaw in the system:  The highest pressure difference is only attainable by starving the evaporator, producing superheat in the range of 30 to 50 degrees F.  In terms of effectively picking up heat, the evaporator coil is grossly underused.  I have to say though, it does not appear that such high superheat values affect the compressor suction greatly.  This superheated gas passes through the ejector and is re-saturated.  The suction back to compressor remains saturated (or very close) at all times.  As I said, not much heat is being picked up, which becomes apparent by a drop in condenser pressure, and compressor discharge temperature.  Later, when I switched back to the air cooled condenser, the difference in heat transfer is easy to appreciate by simply placing my hand in the air stream of the condenser coil.

The evaporator can be made to pick up more heat, with a smaller delta T, and little superheat, by cracking open the gate valve refrigerant control.  However, some of the pressure difference is lost; the tradeoff leaves me with 3 or 4 psi.  I believe a good portion of the work done by the ejector is in pumping refrigerant through the evaporator coil (there is a pressure drop).  Although I originally conceived this ejector to pump liquid, and remove vapor pockets quickly, I’m leaning towards abandoning that notion, and focusing on a flooded evaporator once more, with a separator column of its own, thus utilizing the ejector for compression alone.

Another modification is in the works, which will re-plumb the evaporator as a flooded system, and include a series of plug sight glasses in the column to observe liquid level, as well as the quality of refrigerant flowing back from the evaporator.  I’ve recently done some work with two other styles of primary motive nozzle, with some new findings, but I’ll leave that for another post.